» Together for Michael Non-Profit Organization

'Michael was too good for this world'

Michael's sister and his closest confidante, La Toya Jackson, reveals the man behind the legend - and how his loved ones are coping a year after his death

It sounds a bizarre thing to say, but then it's a mark of the very special bond between La Toya and her brother. Born just two years apart, the pair were inseparable as children. "My mother used to say how we looked identical," she laughs.

"Michael and I loved that. We loved to play together, to dance together. Michael would put on a Fred Astaire movie and we'd watch it and then he'd say to me: 'La Toya, you do the dance, then I'll do it.' I'd do the first few steps and then stop because I'd need to see it again to copy the rest. Michael would just start dancing - every step was exactly right.

"Even as a child I knew Michael was different, special. Everyone knows we had a strict upbringing, and that my brothers [Jackie, 59, Tito, 56, Jermaine, 55, Marlon, 53, and Randy, 48] were singing and dancing as children. But as a six year old it was Michael who would work out the moves. He'd be telling his older brothers where to stand, how to move - he'd even work out what they should all wear."

SHOW TIME: Clockwise from back left: Michael, Jackie, Janet, Tito, La Toya, Randy and Maureen in 1976
In 1977, La Toya accompanied 19-year-old Michael to New York when he was filming The Wizard Of Oz movie The Wiz, in which he starred as the Scarecrow.

"It was our big adventure together. We were these kids in New York who had never had any freedom. We were so close," she remembers.

"He'd work and then we'd go out shopping. We'd buy clothes, lots of men's suits and hats then we'd come back, put on a Kenny Rogers album and dress up. Michael loved us to wear identical clothes and we'd stand in front of the mirror and laugh.

"People don't realise that Michael had this amazing sense of humour. He'd love me to go out with him and see his fans. He loved to play cat and mouse with them. This was in the days before mobile phones but, wherever Michael was, fans would turn out in their hundreds. He loved them. He loved them chasing him about town. For him it was fun.

"He never went off the rails. Michael was always very spiritual. He had this inner goodness and trust, which was what made him so beautiful, but also made him so vulnerable to people who wanted to take advantage."

1977: At the family home with La Toya
Later, however, La Toya's own relationship with Michael took a dramatic twist. After their strict Jehovah's Witness upbringing, in 1989 she stunned the family by stripping off for Playboy aged 32 and marrying her manager, Jack Gordon.

When Michael was first accused of child abuse in 1993, La Toya appeared at a press conference and denounced her brother. The singer later claimed she was in fear of her own life during her abusive marriage in which her husband locked her in rooms, beat her and threatened to kill Michael. It took four more years before she escaped and returned to her family.

"The most amazing thing about Michael was that he never held any of that against me," she says. "I remember when I'd got away from this total hell I'd been through where I'd been beaten, abused, controlled and forced to say those terrible things about Michael, which I didn't for a moment believe, he held out his arms and just hugged me. I was crying saying: 'I'm so sorry, I'm so sorry.' He just held me tight and said: 'I am your brother, I always knew it wasn't you saying those words.' I told him I loved him and he looked me in the eyes and said: 'I will always love you more.'"

La Toya says her greatest regret about Michael is that he never learnt how to mix with real people.

"Michael was never really into going out on dates," she says. "He always told me that he'd never marry until he was in his 40s because he had so much he wanted to achieve. The loves of his life were always his music, his family and his children."

1972: Michael and La Toya as teenagers at the NAACP awards ceremony
Although, Michael married Lisa Marie Presley in 1994 aged 35 and Debbie Rowe in 1996 aged 38, La Toya says he never really fell in love.

"The hardest thing about being a Jackson is this feeling of being isolated from normality. I fought very hard against that. The reason I wanted to do Celebrity Big Brother last year is that I wanted to mix with people who I'd never normally meet.

"Michael was fascinated when I went into the Big Brother house. We even talked about him coming on the show as a huge surprise. He loved the idea but he was also terrified because being as famous as Michael makes you very scared. He never had a single day of his life that he remembered not being famous."

Despite their problems, La Toya remained the woman closest to Michael - his beloved older sister. She was at the hospital on the day that he died, she signed the death certificate and right now she is committed to an ongoing case of involuntary manslaughter against his doctor, Dr Conrad Murray.

"There are lawyers, investigators, a lot of people working on this. It's taking a long time but it's still going on. I honestly believe that Michael died because the people around him were evil.


2003: Michael with Paris(centre), mum Katherine(front left), dad Joe(front centre) and La Toya(front right) at Neverland"He was being controlled, mentally controlled, and the people who surrounded him in the last year tried to keep his family away so we couldn't get to him," she says.

"There is so much about his death that doesn't make sense. I get so angry when I think about his final hours. My brother was surrounded by very bad people before he died. It breaks my heart because I was in that situation in my life and Michael was the one who helped me through it.

"Even now a lot of people around me say to end this fight but I won't. I'll carry on, no matter what it takes. I'm doing it for Michael."

"So many times I look up at the sky and I expect him to appear. To do something amazing and miraculous to show us he is here."

La Toya admits she still can't bear to look at photographs of her brother or listen to many of his songs.

"It's too painful. There are some days I don't even like to look at my own face in the mirror because I look so much like him."

The resemblance between the two siblings is uncanny - although La Toya denies she has ever had plastic surgery herself, merely hinting: "I think it's up to each individual and if you're not happy with something, knowing you can probably alter it a little, that's OK."

2003: With Prince Michael and Paris
She also worries about his three children - Prince Michael (known as Prince), 13, Paris, 12, and eight-year-old Prince Michael II (known as Blanket) - who are being looked after by Michael's mother Katherine, 80, now their legal guardian.

"In those days after Michael died they were so vulnerable, like little flowers standing alone in a field," she says. "There were so many moments when I felt like I was going to fall apart, but I'd look at the children and it would make me strong.

"They are a tribute to their daddy. I always smile when I remember him with his kids. I'd go up to the house and there would be classical music playing. Michael didn't listen to pop. In his house you would hear a Mozart symphony, not Thriller.

"He was very much aware he had to be a mother and a father to his children and he was very sensitive. As a father he was incredible. He'd play with his kids but he was also very strict. They didn't watch television and there was no internet access in his house because he always said he didn't want them to be diseased by the world we live in.

"As a brother he was incredibly sensitive. Whenever I was feeling down he'd send me fashion magazines, or turn up and just sit with me and talk or watch The Three Stooges together. One time he rang me up and said: 'You love Frank Sinatra, don't you?' An hour later he arrived with a huge photograph of Frank he'd had him sign for me," she remembers.

"Michael went through so much. In many ways he was too good for this world. He was like a child in an adult's body and his children were everything.

"What is amazing is how well the children seem to be now. My mother is doing an amazing job. There is a lot of laughter in the house and so many pictures of Michael everywhere.

"I feel sorry for my mother because when Michael died a piece of her died too. She has changed, but I know she finds comfort looking after his children.

"I also know Michael wanted them to be happy and all of us, as a family, have come together to make those three little ones our priority."

To mark the anniversary of his death, La Toya says the family is planning a reunion and will spend the day doing some of Michael's favourite things.

"We don't want it to be a sad day," she insists. "We want to celebrate Michael's life, his wonderful personality, his incredible talent and his beautiful spirit. Maybe we'll watch some old movies, play some music and have a party. 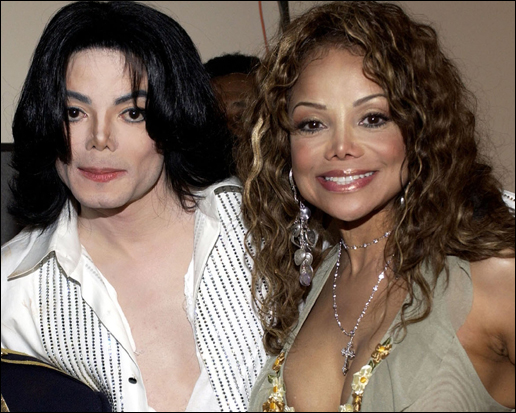